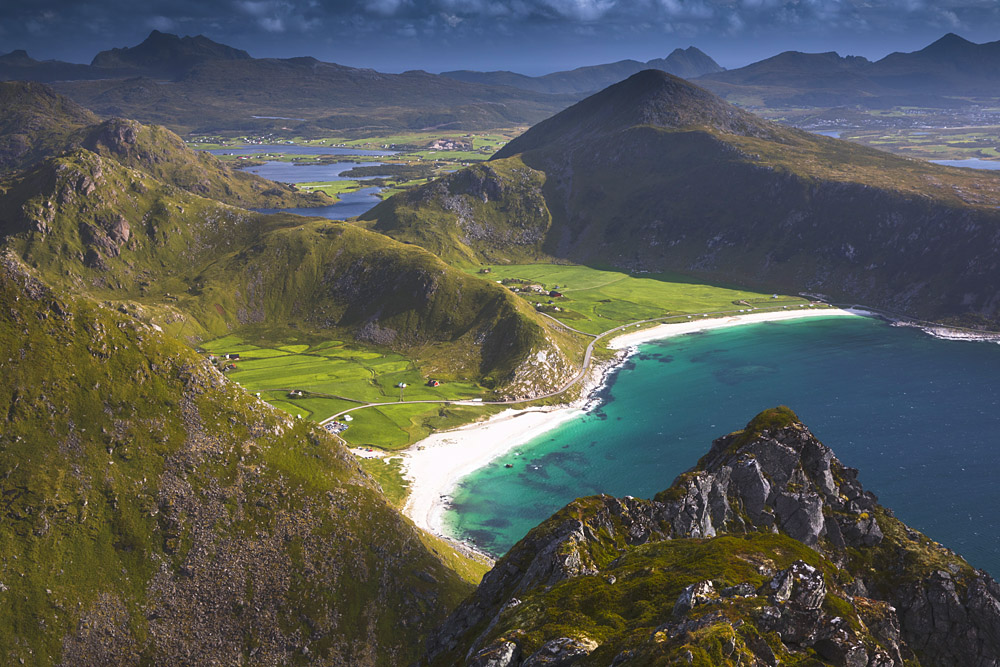 Veggen Lofoten may only be a small mountain, but definitely delivers on views! At 489 masl, it rises proudly between two of the most beautiful beaches in Lofoten – Haukland Beach and Uttakleiv Beach, and is the best viewpoint to see the two stunning beaches from above! It’s also one of the shortest Lofoten mountain hikes and easily accessible by car, you should definitely draft it to your Lofoten Itinerary!

Veggen is an alternative short hike to its more popular sibling – Mannen. The trail, however, is steeper and therefore chosen by smaller number of visitors – which makes it much quieter than Mannen.

Continue reading to find out why you should hike to Veggen and what to expect along the way! 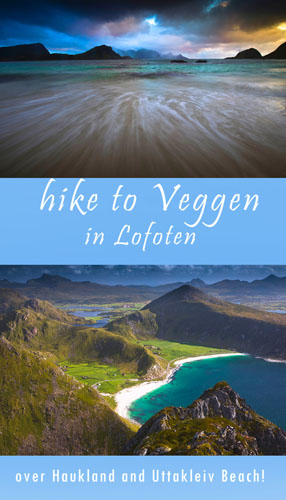 How to get to Veggen trail head, parking information

The trail to Veggen Lofoten starts at Uttakleiv Beach car park (directions). Please note that a charge applicable for motorcycles and cars/campers in 2019 was 50 NOK per 3 hours.

However, the car park area is relatively small, as in 2019 more spaces were dedicated for motorhomes and caravans overnight stay, and organised into a make-shift campsite (during our previous visit, in 2018, the proportion of parking /camping spaces was opposite). Available facilities are: toilets, chemical waste disposal point and rubbish bins. More info about the campsite can be found at the bottom of page.

Many paths run across grassy dunes between the beach and foot of Veggen mountain, most of them are faint and disappear after only a couple of metres. Hence it’s essential to follow a good, well defined trail to get to the foot of Veggen fjell, and start the ascent in right place. The clearest path starts near the car park, between the toilet block and bus parking spaces. Although it’s not signposted, the path is very easy to find and follow. After about 10 minutes, the path arrives to the slopes of Veggen and the ascent begins.

When we first saw the path climbing Veggen slopes, we weren’t sure whether we should really follow it! The hike began with a very steep, muddy section climbing to a low saddle. Ascent required a lot of care and focus; in couple of places the path was accommodating a little stream, hence it was muddy and slippery.

‘Well’, Bea said, ‘it’s OK to climb up, but going down will be a challenge!’ Fortunately, as we discovered later, the muddy and steep section didn’t present much problem on our return to the car park.

After about 20 minutes of steep climb we reached a saddle. With great relief we sat on lush grass to take a short break. The saddle happened to be a spacious meadow with small, blue-watered lake, Vasskarvatnet.

Route up the steep slopes of Veggen (view from Mannen)

To our surprise we heard familiar cries, high in the sky above. A couple of eagles was circling above us!

These two majestic birds of prey accompanied us for another couple of hours. They were peacefully gliding high up, but later we also witnessed a ‘marital fight’ (at least we thought it looked like one!). What a spectacular sight it was! The eagles were attacking each other, their claws forward and ready! And these angry cries! We’ve never seen anything like it! Soon enough the eagles were at peace again, effortlessly gliding high above, only to disappear in the crag a minute later.

After such spectacular show, we were astonished and enthusiastic, eager to continue the hike.

We followed a faint path on eastern side of the meadow, and soon found ourselves facing a steep climb again! Only this time our trail ran over soft, heather ground. Some sections were so steep that our feet were sliding down! Luckily, we were able to reach out and use heather as hand holds – it was strong enough and provided good grip.

What a struggle to climb up, it took much effort!

Finally the terrain levelled a little and we could catch our breath again. Under our feet was a soft blanket of lush, green heather and foliage, incredibly soft to walk on!

We realised that all the way up, we enjoyed views to unspoiled Uttakleiv Beach, its white sand and turquoise water, waves gently washing the shore. However, once on the summit ridge, we had an overview to the other side of the mountain and stunning Haukland Beach!

Looking down to Haukland beach

We took in the views and followed the ridge to Veggen summit.

Haukland Beach stretches on western side of Veggen and is surrounded by small hills and flat-ish dunes. I must admit, views to Haukland Beach were even more spectacular than to Uttakliev Beach!

We recommend exploring the two stunning beaches on a day trip from Haukland! Not only you will enjoy a peaceful coastal walk from Haukland Beach to Uttakleiv Beach, but you can also add a short hike to a viewpoint, and see the two stretches of white sand from above! It’s a fantastic day out in Lofoten’s finest scenery!

Summit of Veggen is marked with a cairn (pile of stone) and makes an amazing viewpoint! Although summit ridge is narrow, it doesn’t have feeling of being exposed nor dangerous, there’s enough space to walk comfortably and safely.

At the top, we were briefly joined by another couple, they were the only other hikers we met that day.

Bea and I always take our time at the summit, unless the weather is horrendous.

Otherwise, we enjoy views, take dozens of photographs. Most importantly, we have a cup of honey and ginger tea, some snacks – nuts, raisins or a sandwich. It comes very naturally, sometimes we just sit in silence and cherish the moment, appreciate how lucky we are to be there.

The most spectacular views from Veggen summit were to Mannen mountain (and rugged mountains further to the west) and to the east – towards Leknes area, a maze of wetlands, lakes, islands and peninsulas.

When we finally satisfied our eyes and souls, we hit the trail again, retraced our steps to the car park.

The descent went surprisingly smoothly, getting down the steepest sections wasn’t as hard as we imagined. Quickly we hiked down to the saddle, hoping to see the eagles again, but they have already moved on.

If you feel that the steep ascent to Veggen is too much, why not walk to the other stunning viewpoint over Haukland and Uttakleiv beach? Mannen is much easier and shorter hike, but offers amazing view to the beaches!

We were happy to find out that there is a small, self-service campsite at Uttakleiv Beach, as well as opportunity to wild camp at nearby Haukland Beach!

Wild camping at Haukland Beach: camping is not forbidden at the large, free car park over Haukland Beach, in fact it’s a very good spot to spend a night in a camper. This car park is divided into two sections: there is a height limit barrier at the part nearer the beach, however the part nearer road has no barriers. The grassy area between car park and beach is flat and suitable for tents. One thing to note, however, is that the toilets are only open in summer (unfortunately, not maintained regularly) and the area is pretty much an open space with couple of houses nearby.

Camping at Uttakleiv Beach: there is a basic campsite at Uttakleiv Beach, checked twice daily by a warden. The ‘campsite’ is a flat-ish, grassy area at beach end, with some benches and tables provided, as well as a provisional sink & tap with cold water (open air), a two-toilet block and a chemical toilet disposal point for campers. It’s a self-service facility; to stay overnight at Uttakleiv Beach one has to pay at the ticket machine (low season) or to the warden (summer). Updated prices in 2019: 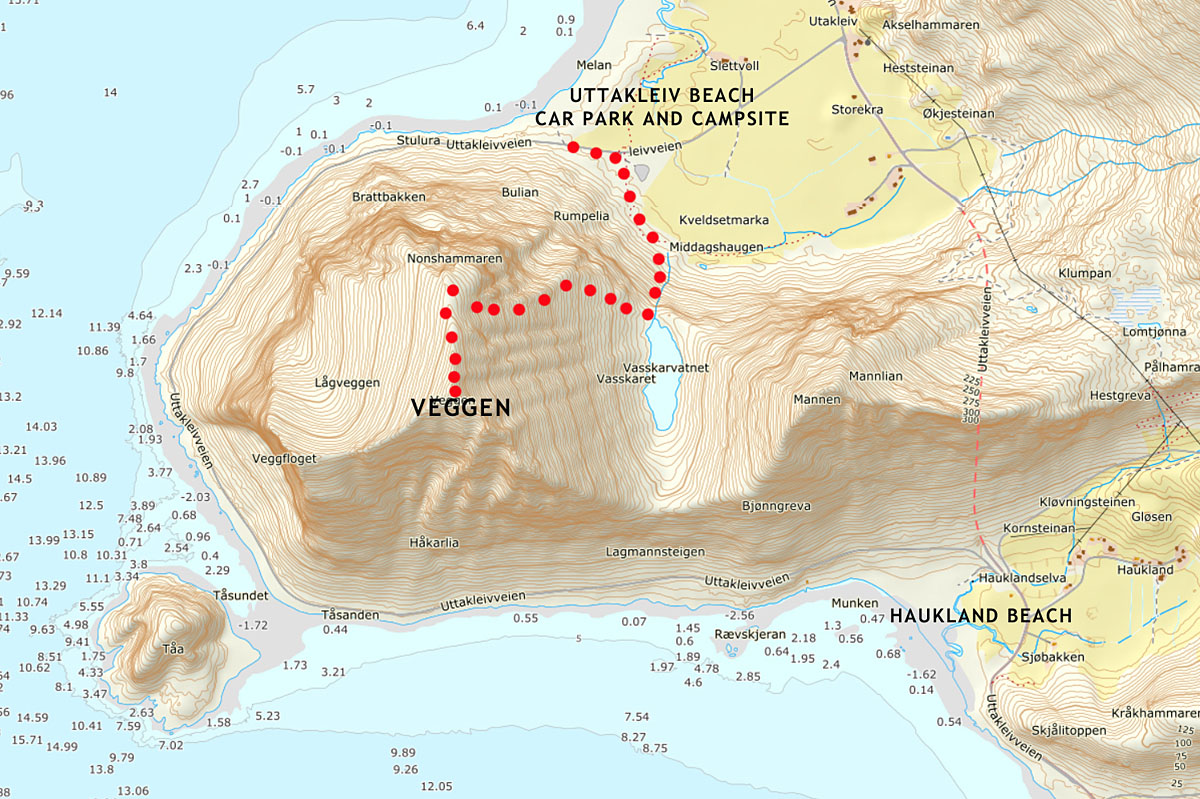 We think that hiking a mountain with views to ocean, sea or beaches is like hitting bull’s eye! Hiking Veggen Utakliev was just like that – a small mountain rising over two of the most beautiful beaches in Lofoten. The beaches – Haukland and Uttakleiv, seen from above were sensational. Although trail to Veggen is a bit steep, climbing to the summit is well worth the effort! As Veggen is easily accessible by car, especially from nearby towns, it’s one of best Leknes hikes. Why not try it!?

We have explored the two beaches previous day – find out how to turn two short beach visits into a day of adventure in Haukland and Uttakleiv!

LOOKING FOR OTHER AMAZING HIKES AND BEACH WALKS IN LOFOTEN?

If you’re looking for other hiking ideas on Lofoten archipelago, check out these amazing hill and beach walks! All include detailed route descriptions and maps:

KVALVIKA BEACH AND RYTEN – why not combine conquering Ryten with a visit to Lofoten’s gem beach – Kvalvika? A great, rewarding hike in Lofoten’s wild mountains.

ROREN AND YTTERSAND BEACH – short and easy hike to Roren, a viewpoint over calm waters of Flakstadoya and Yttersand Beach. Why not enjoy eagle-eye view first, and then descend to the picturesque sandy beach?

MUNKEBU HUT – explore wilderness of Moskenesoya island in the western part of Lofoten archipelago. The hut is located amongst high rocky mountains and makes a perfect day hike, or a great base to explore Munken and further summits.

TINDSTINDEN – a great adventure near Moskenes. This relatively short but strenuous hike provides a lot of excitement and stunning views over the Moskenesoya island.

We work hard to make this blog the best it can be. If you've found it useful, please consider buying us a coffee to show your support. Thank you!

STAY UP TO DATE

Don't miss out, join us today to receive a monthly email, and be inspired to discover the stunning outdoors!

Norway Last picture in 2019 must be from Norway :

Norway Life's perspective do change when one look

Top9 by Instagram 2019 was a year full of adventu

Sweden Another picture from beautiful Lapland. No

New to Airbnb? Get your £34 discount!

Sign up for our monthly newsletter! Let us inspire you with first-hand information about stunning hikes and road trips in Europe! Don’t miss out! Join us today!

Disclosure: please note that some of the links on this website are affiliate links. If you make a purchase through one of those links, you won’t pay a penny more, but we will get a small commission, which supports us in our travels. Cheers!