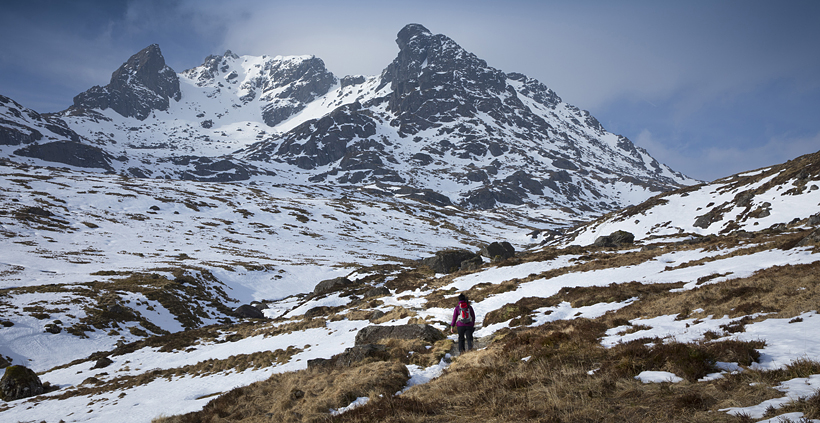 The Cobbler, also known as Ben Arthur, is one of the best short hikes in Scotland. Located amongst Munros, Scottish highest mountains (over 3000 ft high), it is an enjoyable easy walk with stunning views. Summit of The Cobbler makes for a great viewpoint to surrounding hills! It is located over the shores of Loch Long and, being part of Arrochar Alps range, this mountain is full of character – it provides a fine hiking experience in all seasons, a bit of challenge and unlimited photo opportunities!

We have already conquered The Cobbler on several occasions, in different seasons, and would like to share our winter adventure in Arrochar Alps! 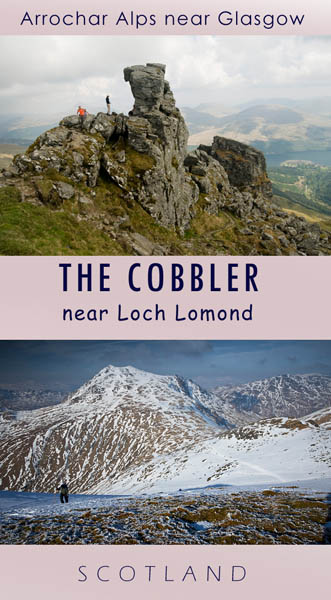 How to get to The Cobbler, aka Ben Arthur

DISCOVER OTHER STUNNING HIKES NEARBY! We recommend another two great hikes, both are less than 1 hour drive from The Cobbler!
Ben A’an – a fine, short hike over Loch Katrine, near Callander. Ben A’an is our favourite viewpoint in Scotland!
The Tarmachan Ridge – located over Loch Tay, this moderate difficulty hike will take you along fine mountain ridge. Three possible routes to suit everyone’s abilities!

About The Cobbler hike

Ben Arthur, is one of the lowest mountains in the area, however it is not to be underestimated! The hike will satisfy walkers with all levels of experience as there are at least 3 trails to the summit. Hence level of difficulty can be adapted to any walker’s needs.

For instance, there is a well made path with stony steps for less experienced walkers, as well as rock climbing routes on Cobbler’s eastern face for adrenaline seekers. In winter the mountain can change into a frozen stronghold which brings the need for proper winter gear like crampons and ice axe, and we believe it’s one of the best winter hikes in Scotland! Find out how to prepare for wintry adventure hiking The Cobbler, follow our extended advice.

In a nutshell, The Cobbler has many faces depending on route taken and the season, so please ensure that you are prepared accordingly to the conditions.

We really like this little mountain and have hiked it numerous times, found it enjoyable in any season. Our last visit to The Cobbler was in winter. Due to freezing conditions we ended up having a very interesting walk, half spring-like, half wintry.

Upon our arrival to Succoth car park we were excited, although one glimpse to the surrounding hills told us that the conditions higher up are still pretty much winter-like. Nope, we did not expect that!

Weather had been mild, snow was almost gone and only remained in highest areas of Scotland. We assumed that Arrochar Alps were clear of snow and ice and; oh dear, how wrong we were! Having said that, we were geared with microspikes and walking poles, but unfortunately our crampons were left home! However, we still decided to give it a go, tackle the mountain and see what happens. And so we did.

The forest track starts at the far end of the car park, across the road. It is signposted to The Cobbler and Beinn Narnain and winds thru a nice spruce forest. The views to Loch Long and Arrochar village were stunning. At one point the trail crosses another forest track; please make sure to continue the path up rather than joining this track; there is a signpost and an arrow pointing where to go (a bit to the left).

Also, there is a bench available nearby, and we loved it – it’s a nice place to stop for a little break and take a photo before hiking further up. 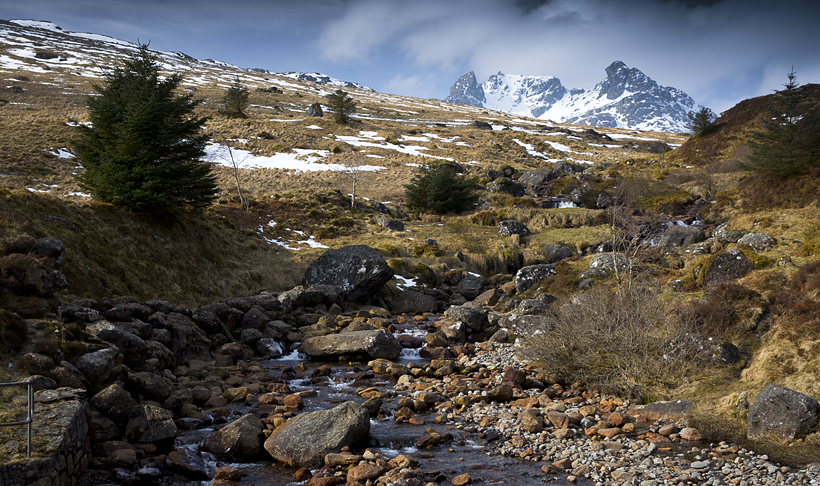 At the dam, looking towards glen’s end and rocky horns of The Cobbler

On average it takes about 1 hour to reach the top of the forest. Then the space opens up and The Cobbler is seen in the distance, at the very end of the glen (Scottish word for ‘valley’). There is a small dam which, again, makes a good spot for a well deserved break. The glen is not exactly flat, but definitely is easier and more pleasant to walk that the forest path. Luckily, the glen flattens towards the end.

As walked thru the glen, views became more interesting and exciting; with The Cobbler straight ahead, and rocky slopes of its big brother, Beinn Narnain on the right. 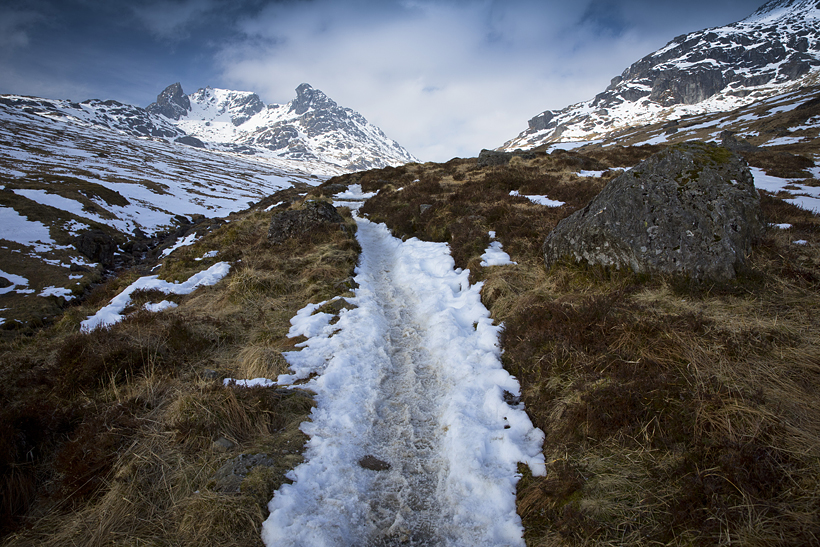 In the glen, following path to The Cobbler

It was there, at the glen, when we came across last breath of winter; wet snow covered the path, and the hard grip of winter evident on higher slopes. However, by no means we felt discouraged!

After another 40-50 mins walk and we reached the front foot of Ben Arthur. The views were even more dramatic; sharp ridges partially covered by snow reminded us why these mountains are called ‘Alps’! Of course it’s a completely different scale, but still very nice and rocky, atmospheric area.

Also, along the way we came across massive rocks, called Narnain Boulders. And you know what? Yes, they’re another great spot for a short break! 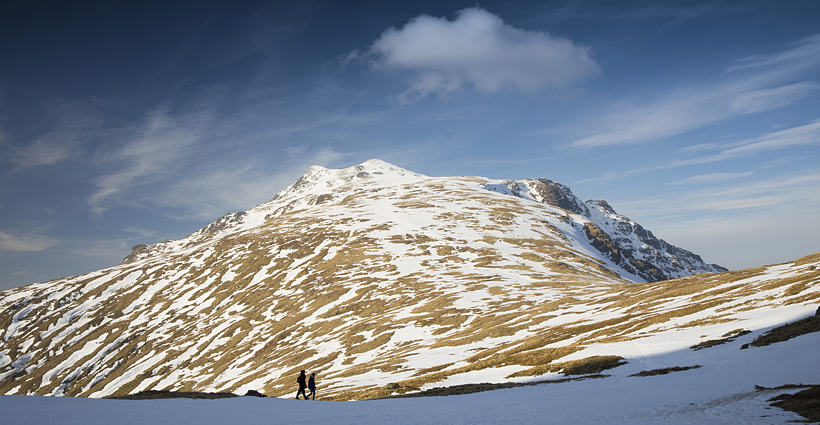 Some 10 minutes past the boulders we found ourselves approaching the cross junction of paths. Looking ahead we saw mighty Beinn Ime, the highest of nearby mountains, and, apart from the fact that it’s the furthest of them, I would definitely say that it’s the easiest one too.

To the right was a path descending from Beinn Narnain. Finally, to the left were the stone steps to The Cobbler. To our surprise, the steps disappeared under the thick cover of snow. We were only geared with microspikes (Bea) and a walking pole (myself). It was my own fault to be so under-geared, it was me who convinced Bea we didn’t need crampons…

Anyway, slowly we tackled frozen slopes of The Cobbler. I found it quite hard to get grip at first, as the snow ,although very deep, was completely frozen with a thin layer of ice, just like shiny skin.

After a couple of minutes we finally found a way to climb up rather than slide back down. There were many other walkers trying their luck up the ice, but most of them were giving up and ‘bum sliding’ down to the paths junction.

Encouraged by good progress, we cracked some jokes, like ‘it’s only necessary to have microspikes and walking poles to climb this mountain. Great, we have both, you have miscrospikes and I have a pole!’

We didn’t even realise that very soon we were already half way up and approaching North Peak of Ben Arthur. 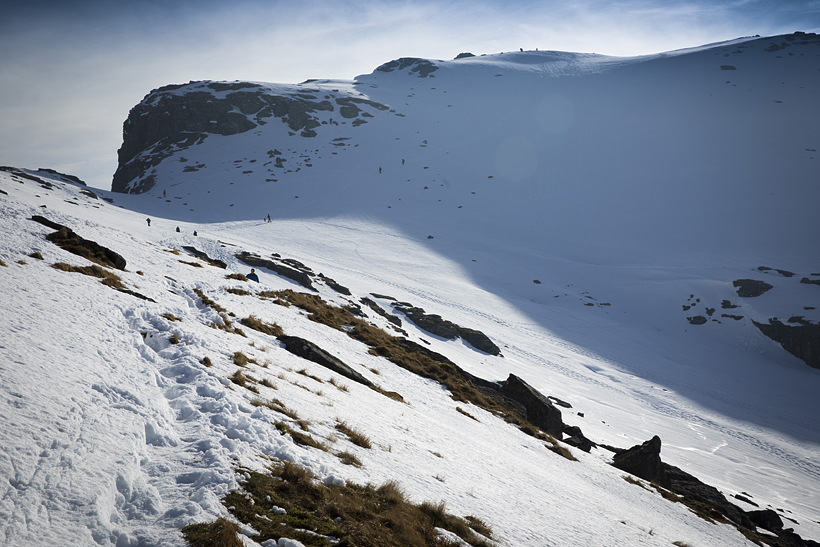 Summit of The Cobbler from path along the North Peak

Before final approach to the highest summit of The Cobbler we took a couple of minutes break for snacks and hot tea, to enjoy sunshine, amazing views around and the fact that, amazingly, the wind stopped completely (which does not happen in Scotland very often!) Happy and rested we climbed the remaining 200 metres to the summit. We were both elated to have finally climbed it!

The true summit of Ben Arthur is a rock pillar (see the photo above), a bit like a needle! One needs very good head for heights to conquer it as there is a couple of metres drop which makes my legs shake at every attempt. I am, however, fully satisfied without climbing this final summit rock.

The summit plateau is spacious, with 360 degrees views to surrounding hills. It gave me feeling of being at the top of the world although I knew that most of surrounding mountains were much higher than The Cobbler. It did not feel like it at all! 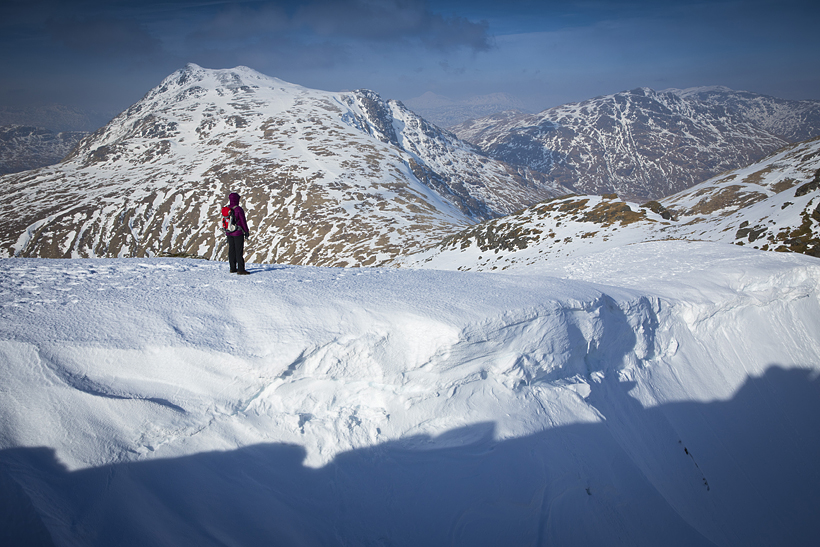 Cornices on The Cobbler summit plateau and Beinn Ime 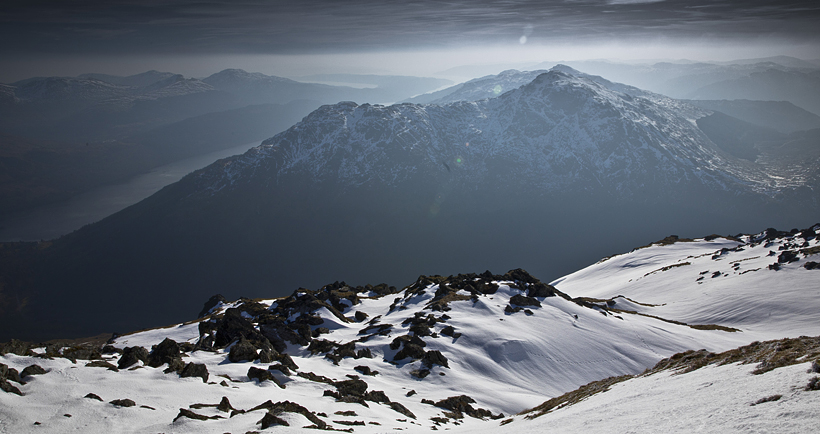 After taking dozens of photos we were ready to call it a day and return to the car park, by retracing our steps (literally) down to the North Peak and further, to the junction of paths and the glen. This way was the fastest and safest route in the conditions given. 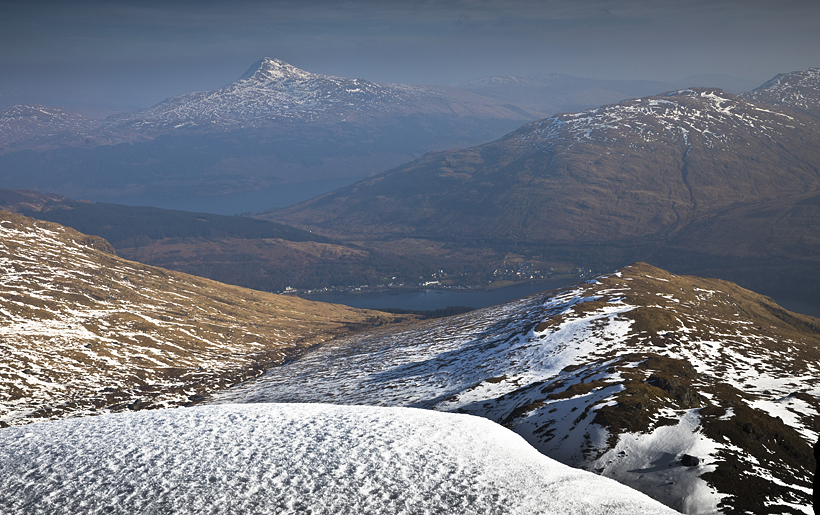 Alternative return routes from The Cobbler summit to the glen

There are 3 options of descent from Ben Arthur’s summit; one can either retrace their steps to the glen via stone steps, or alternatively take one of the other 2 routes of descent, both involve scrambling, therefore we recommend them for the summer walks.

First of the two alternative routes starts in the saddle between the summit and North Peak, descends steeply along the South-Eastern slopes and rejoins the main path in the glen near Narnain Boulders.

Second alternative descent route is our favourite and we strongly recommend checking it out! It’s the most interesting route (have a look at a map below). The trail starts at the right side of the summit rock with a steep, but relatively short scramble down to Arthur’s Seat. Further, one has to follow a faint path along the ridge towards An t-Sron, which continues even further – to the end of the ridge. Near the ridge end is a very faint path descending to the left, towards the small dam. This is the same dam we passed at the very beginning of the glen, while hiking up.

Both alternative routes are easy to navigate in good weather.

In the glen, near Narnain Boulders

We took our time on the way back, there always are more photos to be taken and, most importantly, we are never in a hurry to return from a nice walk. We try to preserve the moment, it feels like a loss to end a walking day and drive back home…

Wild camping near The Cobbler and campsite information

The Cobbler is located in Loch Lomond and Trossachs National Park, near Glasgow. This region has been extremely popular with campers for many years which led to degradation in many areas of the park. The park’s management, therefore, decided to introduce ban for wild camping, it is forbidden by law from April to October. Nearest campsites can be found in Luss, Sallochy, Millarochy Bay and Inverbeg.

What we loved about hiking The Cobbler

The Cobbler is a straight forward hike in beautiful surroundings. The trail is well made and easy to follow throughout. Depending on walker’s fitness or simply the mood, the hike can be extended to include neighbouring mountain (or two) Beinn Narnain and Beinn Ime – this makes a very adventurous and demanding day out in the hills.

Would you like to conquer The Cobbler in winter, but are unsure how to prepare for the challenge?

Read our article on Winter Hiking Tips to find out what to expect during a wintry hike and how to prepare for one, so you can comfortably and safety enjoy the stunning wintry outdoors!

We work hard to make this blog the best it can be. If you've found it useful, please consider buying us a coffee to show your support. Thank you!

STAY UP TO DATE

Don't miss out, join us today to receive a monthly email, and be inspired to discover the stunning outdoors!

New to Airbnb? Get your £34 discount!

Sign up for our monthly newsletter! Let us inspire you with first-hand information about stunning hikes and road trips in Europe! Don’t miss out! Join us today!

Disclosure: please note that some of the links on this website are affiliate links. If you make a purchase through one of those links, you won’t pay a penny more, but we will get a small commission, which supports us in our travels. Cheers!